Jon Cleary started writing while he was in the army. He became a full-time writer following the success of The sundowners, which sold over 3 million copies. He wrote nearly twenty crime fiction books.


We have the following book(s) in stock 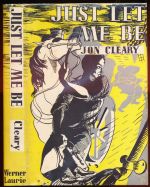 Just let me be

Just let me be

Cleary, Jon
Werner Laurie
A war-veteran hides a body after accidentally knifing him when he intervenes in a fight.
£40.00
Read More